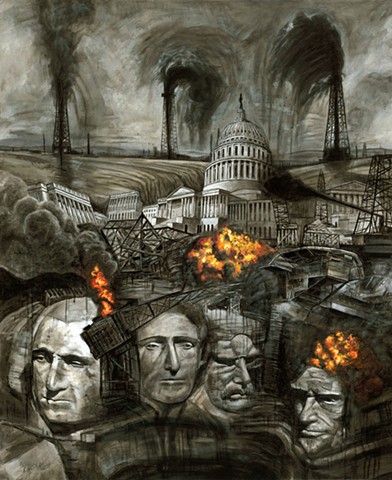 The painting Hemorrhage is an homage to the American obsession with oil - the unending hunt for new sources within the earth, the unquenchable thirst for more, and the combustion and consumption that power our culture and politics.

The top of the painting is inspired by the Lakeview Gusher which occurred in Kern County, California from March 1910 to September 1911. This oil well created the largest accidental spill in history and released 9 million barrels of oil into the landscape. The oil wells at the top of the drawing represent the “blowout” events where an uncontrolled release of oil occurs, hemorrhaging out over the earth and spraying up into the sky. Beneath this landscape, the nation’s capitol building convulses and churns amidst the oil well structures and spray.

The black paint flows down the panel and envelopes the figures of Washington, Jefferson, Roosevelt, and Lincoln at the bottom. On Mount Rushmore, these figures symbolize the struggle for independence, territorial expansion, permanent union, equality, and industrial growth of the nation. Hemorrhage represents the uncontrolled darkness flowing over the principles of liberty and freedom as inspired by environmental catastrophe. This darkness and fire represent the erosion and destruction of our democracy in an unending quest for growth and power.