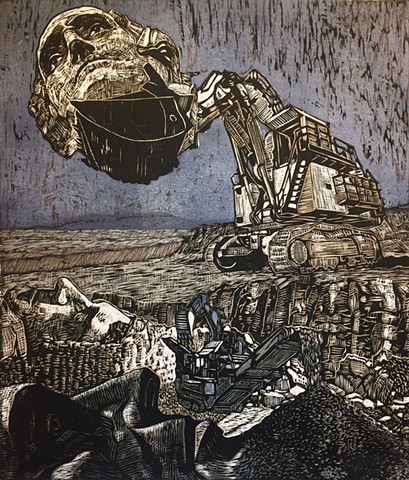 According to the dictionary the word Quarry has two main definitions. The first one has to do with prey, as in “one that is sought or pursued”, and related to this there is an obsolete definition: “a heap of the game killed in a hunt”. The second definition is “an open excavation usually for obtaining building stone, slate, or limestone”, and related to this a quarry is additionally defined as “a rich source”.

In the image Quarry the excavators represent the hunters, in this case the machines quarrying the rich source. The head of Lincoln lies at the bottom, his beard being formed from the pulverized rock from other parts of his head (or perhaps Roosevelt). Slightly above him lies Jefferson, awaiting his deconstruction. Overhead, Washington is being carried to the pit by an enormous excavator.

For me, these stone heads represents the nature and landscape of our country (both physically and politically), both our most valuable resource and a source for unlimited exploitation. This rich source of prey has been heaped into the pit to be ground to dust and to be used for some unknown purpose. Will it be rebuilt into something better, will it be scattered and lost, or remade into something ominous?