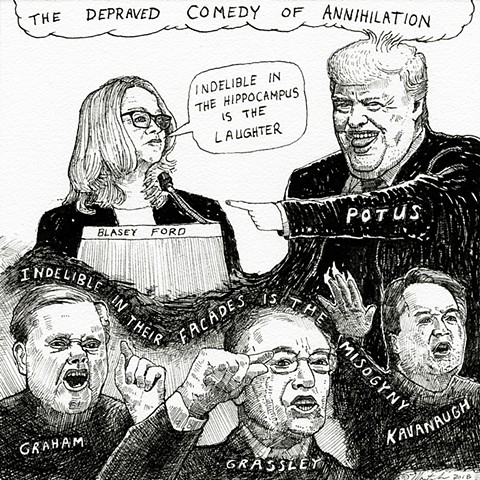 One of Trumps tactics is to weaponize laughter to turn all seriousness and criticism against him and his allies into a depraved form of comedy. Any person who challenges him can be reduced to a cruel joke. As Blasey Ford stated, her greatest fear was that by coming forth she would be “personally annihilated”. At a typical Trump rally, this laughter turns into a form of shared cruelty that binds the audience together and to Trump. He is a surrogate bully that punches down on their perceived adversaries – liberals, intellectuals, feminists, scientists, and others who they believe are victimizing them. The powerful who support and defend Trump also feel under assault because their privilege and power is being questioned. The veneer that protected their abusive tendencies for so long is coming off and reveals their true identities underneath.